Everyone has their favorite patch of Earth and mine is Martha’s Vineyard. I’m headed there for Labor Day and cannot wait a second longer. I’ve spent 29 of my 30 summers on this little island in the Atlantic, skipping out just once during the year we moved into our new house. (Still bitter about it, thanks.)

Growing up in the Pennsylvania countryside, our annual family trip to the Vineyard offered a welcomed change of scenery and a familiar crew of friends. Whitewashed whaling houses. Salty seashores. Blissful bike rides and dripping ice cream cones. To this day, the island represents everything a sandy New England summer should be, and more.

Over the years, my family has collected countless memories from time spent together on island. Well-worn stories are tucked away in a shell-covered box, kept safe in the off season, awaiting our return and the chance to recount family favorites.

There was the summer Mom carried me around town in a Moses baby basket, or the night my brother secretly buried leftover lobster shells in the flower bed. (They smelled awesome the next morning.) There was the day our seventy-something-year-old grandfather jumped fearlessly off of the Jaws Bridge, and the infamous afternoon our car got stuck in the hot sand after a long day at the beach. Last summer, we added not only a new memory, but also a new member to the family as my husband and I celebrated our wedding and danced the night away by the Edgartown lighthouse.

Like the families that return to its quaint coast each year, the Vineyard is rich with stories that only get better with time. Some are well-known, others held more closely to the fisherman’s vest. Being a fan of all things food and Food Science, two of my favorite island tales happen to involve iconic eateries favorited by locals and tourists alike. Their unique histories are diligently documented on the backs of their menus. (What? You mean you don’t read the backs of menus before ordering?)

The Story of Black Dog: It All Began with a Stale Donut

With the Vineyard having no year-round restaurant, Captain Robert Douglas’ repast on that particular night  was a bitter cup of coffee and a dry, packaged, store-bought donut. The Captain had finally had enough. He began sketching on a paper napkin. A small gambrel-roofed building started to take shape. There were more napkins and more sketches. Captain Douglas played with the placement of the windows, added dormers, then pulled it all together with a large red brick fireplace. The restaurant would be built from a pile of southern long leaf pine lumber…along with an old naval canon (sitting outside the Tavern today) from a salvage yard in Boston. The restaurant…would give Vineyarders and visitors alike a place to meet and eat.

The Captain’s excitement was contagious. Townsfolk helped build and shingle the establishment. Locals shared their recipes for chowders, soups and pies. The Captain named the restaurant after his faithful canine companion, “Black Dog.” Not much has changed since those early days…Out of a sailing captain’s love for the sea, his island home and, of course, his dog, The Black Dog was born.

The Legend of Moshup: Dining on the Aquinnah Cliffs 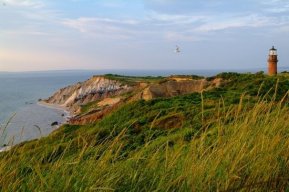 Many moons ago, there lived a chief. He was known to his people as Moshup, The Great One. Being a warrior meant many things – the most important was providing the tribe all they needed to survive throughout long cold New England winters. Moshup would bring home white tailed deer…and wood needed to keep the fires hot. Deer pelts and hides gave warmth and shelter to the people…and the venison was enough to provide strength and good health to all.

Whales provided oils for torches and bones that were used as tools. Many whales were caught by Moshup on these very cliffs…The red clay is said to signify the blood spilled in those battles. Moshup is known today still as The Great One and the Wampanoag of Aquinnah still tell his stories…to their children.

If you find yourself on the Vineyard this summer, do yourself a favor and stop by these two renowned restaurants for a taste of the island. Their menus are as interesting as their histories, so the choice might be difficult. But take if from a budding Food Scientist, you can’t go wrong with French Toast at Black Dog and Lobstah Rolls at Aquinnah. (Save me a bite!)